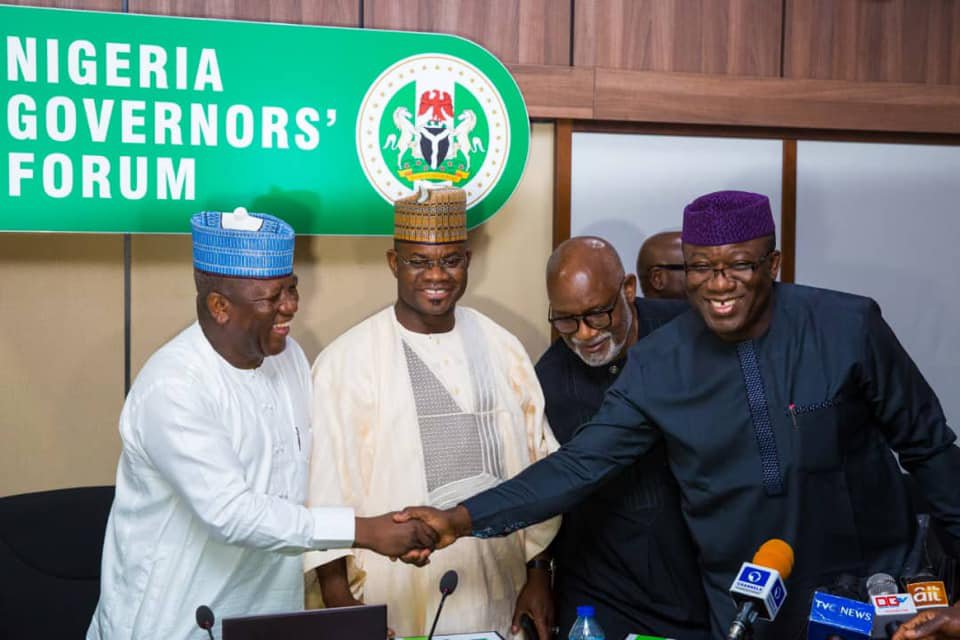 The governor of Ekiti state, Dr. Kayode Fayemi, on Wednesday night emerged as the new chairman of the Nigeria Governors Forum (NGF).

He emerged as the consensus candidate during the meeting of the forum in Abuja yesterday.

He succeeded Governor Abdulaziz Yari Abubakar of Zamfara State who was chairman of the forum since 2015.

Governor Aminu Tambuwal was also elected as the new vice chairman of the forum. Their tenures run from 2019 to 2021.

Thereafter, the governors unanimously agreed on the nominees.

The governors also resolved to hold a meeting with President Muhammadu Buhari to find effective solutions to the security challenges facing the country.

Briefing newsmen after the meeting, the outgoing chairman of the forum, Governor Yari said the forum was concerned about the recent guidelines of the Nigeria Financial Intelligence Unit (NFIU) which sought to impose restriction on the powers of states and local governments.

He said the new guidelines had no legal basis under the NFIU Act and are contrary to constitutional provisions which put the State Joint Local Government Account under the legislation of the State House of Assembly.

The governors also said the guidelines were detrimental to the interest of states and local governments by crippling programmes such as Universal Basic Education programme, Primary Health Care under one roof as well as the payment of salaries of teachers, medical doctors and health workers among others primarily funded by state governments.

The newly elected chairman of the forum, Governor Fayemi said the new leadership of the forum would build on the success stories and gains of the previous leaders.

He said the new team was also committed to a strong partnership with the federal government and other arms of government in tackling issues that arise amicably in the interest of the country.