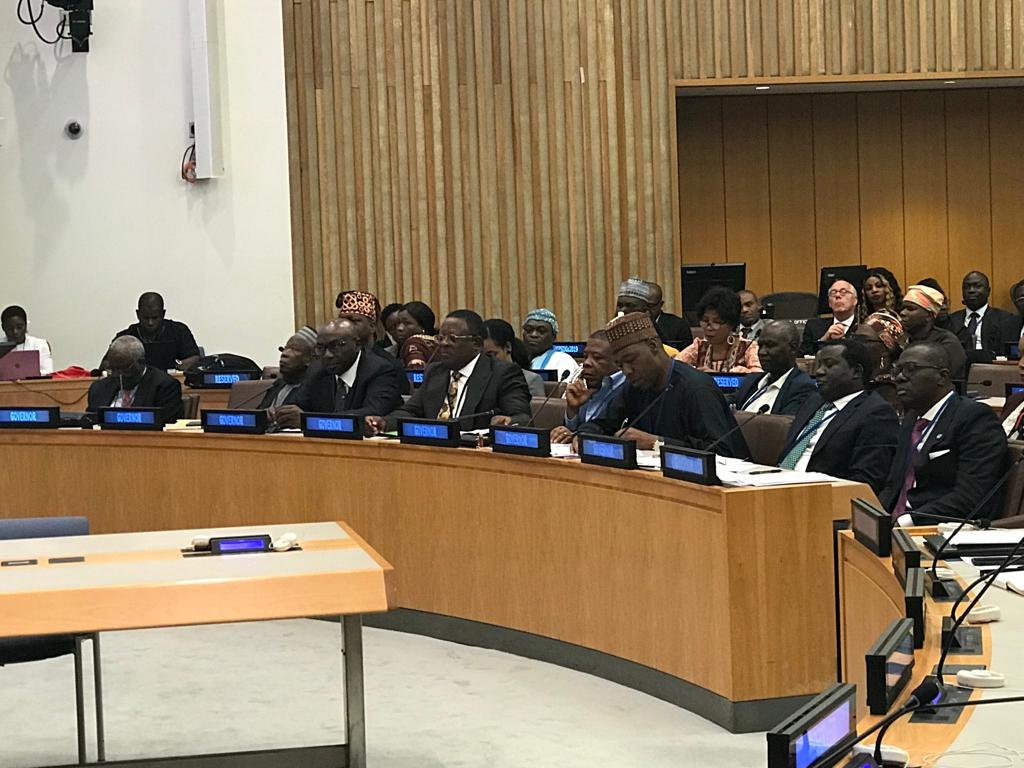 The Nigeria Governors Forum (NGF), a body comprising the 36 state governors, recently took its activities beyond Abuja. The forum decided to go global. Its delegation, led by the chairman of the forum, Ekiti State governor, Dr Kayode Fayemi joined two permanent missions to the United Nations, Spain and Nigeria, in co-hosting a high-level side event at the just-concluded 74th United Nation General Assembly in New York. The session was tagged ‘Subnational Implementation of SDGs and the Paris Agreement: the Nigerian Experience.’

The event x-rayed the role of subnational governments in achieving the SDGs and the Paris Agreement.

The event was steered by two panels; Panel one dissected Subnational Implementation Progress: SDGs and climate action in Nigeria, with governors of Ebonyi and Borno, and UNDP Regional Director for Africa as speakers.

Panel Two had Lagos State’s Babajide Sanwo-Olu and Emeka Ihedioha of Imo State and Senior Vice-president for the 2030 Development Agenda, Sachs and Addler as speakers.

After the two sessions, some of the governors told reporters of plans to seek the assistance of international partners to fully implement the Sustainable Development Goals (SDGs).

Chairman of the NGF, Dr Fayemi, said it was important for the governors to attend the event given the “existential threat” faced by their states.

He said the problem of climate change could no longer be ignored, as the consequences have become too obvious in different states given the amount of flooding, desertification and other menaces bedevilling parts of the country.

Citing a recent international report, he warned that Lagos State, for example, could be submerged if nothing was done soon.

Fayemi said: “You can’t imagine that the governor of Lagos State, the largest economy in West Africa should not be at the forefront of those pursuing this issue. Goldman Sachs just released a report that Lagos might be submerged in the next 30 or so years. For me and any of my colleagues, these are issues that we are dealing with. And we are not doing it out of the national space.

“We cannot do all that without dealing with the green-bond in Borno which is contributing to the insurgence, or erosion in Ebonyi, access to education in Ekiti, farmers-headers clashes in Plateau. These are all products of climate change and human capital development.

Imo State governor, Ihedioha blames the poor releases of funding by the Federal Government for the poor implementation of the SDGs programme.

According to him, before now, the government at the centre used to release N4 billion annually to fund SDGs but regretted that it had not been the case in recent times.

Ebonyi governor, Umahi said even though the South-East states had coped well with the consequences of climate change, particularly flooding and erosion, it has now gotten worse.

He therefore called for international intervention to enable the states to upgrade their infrastructure to tackle the challenges.

He said: “Of course, we had to emphasize the new threat of climate change. In the past, we have had to live with erosion and flooding occasionally, but these days, it is on the increase every year.

“We had to let the international community know what we are doing about solving the problem, the effect on the people, especially schoolchildren.

“When the roads are flooded or washed away, it has a devastating effect in terms of access to medical facilities for children, nursing mothers and also school activities.

Ganduje said climate change was contributing tremendously to the farmers and herders’ clashes in the state.

“If you look at the herdsmen coming in to West Africa because of the drought in some parts of West Africa, they come into Nigeria and migrate into the northern parts of the country, down to the southern parts, creating lots of problems along the route.

So in order to address that issue, we are encouraging the resettlement of herdsmen, so that we change a whole issue of social cultural practice to economic practice.

“What we are expecting from the international community is collaboration, especially in the area of education, technology.”

He said: “The SDGs time is running out to achieve the goals. We are going to look for ways to harness funds to make this good. In our case, what we really need to look at is malnutrition, gender issue, education, poverty.

We have sent a social investment bill to the state House of Assembly. This is for poverty eradication and to encourage enterprise to lend money to the poorest of the poor so that they can scale up their businesses and be more productive.

We are basically replicating the Federal Government Social Investment Programme, which I saw during my campaign that it actually worked. I saw the impact. It is not just giving money to market women, we are including traders, students, entrepreneurs. We are going to implement the School Feeding Programme, because malnutrition is a big problem in the state.

“Another issue is that of WASH – water, sanitation and hygiene. The North-Central is leading in open defecation in the country and we are going to reverse that within the next three years. We are going to build toilets with actual water in them. We are going to modernize the pit latrines, replaced them with water systems.

“In primary health care, we have to create disruptions in the system. We have to create new improved drug resolving system that will make medication more affordable. We are going to engage development agencies in areas they can help us in delivering free medication while we provide counterpart funding in areas like malaria, HIV/AIDS, tuberculosis.”

The governor also said there would be reforms in education, information communication technology and other areas. He said his state had gained a lot at the United Nations General Assembly.

Borno State Governor, Babagana Zulum, called for action against the impacts of climate change, noting that the receding Lake Chad significantly contributes to the security challenges facing Borno State and parts of the northeast.

Zulum explained that he was able to explore opportunities of attracting interventions to Borno State in order to maximize the benefits of his participation at the UN General Assembly.

“We have requested intervention in the area of recharging the Lake Chad, providing infrastructure and strengthening security all in a bid to meet Goal 13th of the SDGs, which is climate action. The goal aims to mobilise $100 billion annually by 2020 to address the needs of developing countries to both adapt to climate change and invest in low-carbon development.

“We are looking at strengthening the resilience of the communities, integrating the national policies on climate change at the sub national level with a view to ensuring that the objectives are well defined and well implemented.

“The enabling environment is being created in Borno State, especially in the area of job creation, fighting desertification, fostering human capital development and means of livelihood.”

The Director General of the Nigeria Governors Forum (NGF), Asishana Okaura, told reporters that the state governors were already recharged towards implementing the SDGs.

He added: “Climate change is real. It is an existential threat and states have a role in ensuring that they implement things that will reduce the power of climate change.

“Secondly, that there is a connection between climate change and SDGs goals. And ordinarily the expectations is for the governors to frame development plan around SDGs goals.”

The President of the 74th UN General Assembly, Prof. Tijjani Mohammed-Bande, on his part said: “SDGs are critical to the world. We must do our part. But when it comes to implementation, it is up to our local authorities.”

The Deputy Secretary General of the UN, Amina Ibrahim, promised the organizers that the UN would support their initiative.

The Assistant Secretary-General and Director at UNDP Regional Bureau for Africa, Ahunna Eziakonwa, said the UNDP would be ready to assist the states. “This forum is something we need to take quite seriously, as a bridge to those who need it the most. You can count on UNDP. See us a vessel to create a healthy competition among the states. We need a healthy competition among local governments, which should be underpinned by data and evidence, to drive service delivery and development in communities.”

For Mr Mahmoud Mohieldin of the World Bank, the choices were quite clear. “We need to do better with partnerships,” he said. “Local authorities, women and young people: they step up, fill in the gaps and support sustainable development. These are three critical groups to involve in support of the SDGs implementation.”