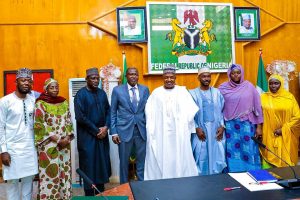 The Bank of Industry has expressed its willingness to continue to partner with Kebbi State Government by putting more funds in developmental projects in the state.

The Managing Director and Chief Executive Officer of Bank of Industry, Mr.Olukayode Pitan stated this when he led some directors of the bank to a courtesy call on Governor Abubakar Atiku Bagudu on Monday 24/2/2020 at Government House in Birnin Kebbi.

He said he was in Kebbi State to further explore areas of partnership with the state government to support entrepreneurs and establishment of Industries and companies.

He said the bank relationship with Kebbi has been very cordial even before the Bank open it’s office in the state in October 2027.

According to him,the Bank has approved various projects across the state to the tune of 3.9 billion naira in which 2.8 went to the Small and Medium Enterprises (SMEs) in the state and about 1.2 billion to some large enterprises.

Pitan explained to the governor that recently , the bank just approved about 1.5 billion for two major projects in Kebbi which were the Zango Kangiwa Farms Limited, rice project and the M-Tech Universal Engineering.

He said the two companies are in the process of meeting conditions but the credits have already been approved for them.

The other projects which he mentioned the bank facilitated its establishment was Labana rice project in Kebbi.

He also said the bank had a managed fund with Kebbi which the governor gave a billion naira out of which about 22 thausand people have benefited from the program of the state government.

He assured that the bank would to do more apart from what the state government has done ” we will put some money directly in some of the projects in Kebbi State .

“” We know that most of the products and the industries the state is investing are agro based because it is the area of strength of Kebbi.

” We will be willing to work with Kebbi , we have done quiet a bit in Kebbi but want to do more” he said.

Mr.Pitan called on the governor and the private sector to come up with ideas and businesses that can be supported by the bank in Kebbi.

He announced that as part of the Bank’s corporate social responsibility, the Bank of Industry would construct an International Technology Hall in the state.

The Commissioner of Budget and Economic Planning Dr.Abba Sani Kalgo said the state attaches great importance to industrialization. He recalled the recent visit by United Nations Industrial Development Organisation in the state for another partnership on industrialization.

Earlier on Sunday at Government House in Birnin Kebbi, Governor Abubakar Atiku Bagudu told Mr. Obikayode Pitan, the Managing Director of Bank of Industry that his government will vigorously pursue its policy of entrepreneurship and investment drive.

The governor said that already some Industries have been established in the state which are agro based such as rice Mills and Tomatoes factory.

The delegation from Bank of Industry interacted with officials of Kebbi State Government and the organised private sector.