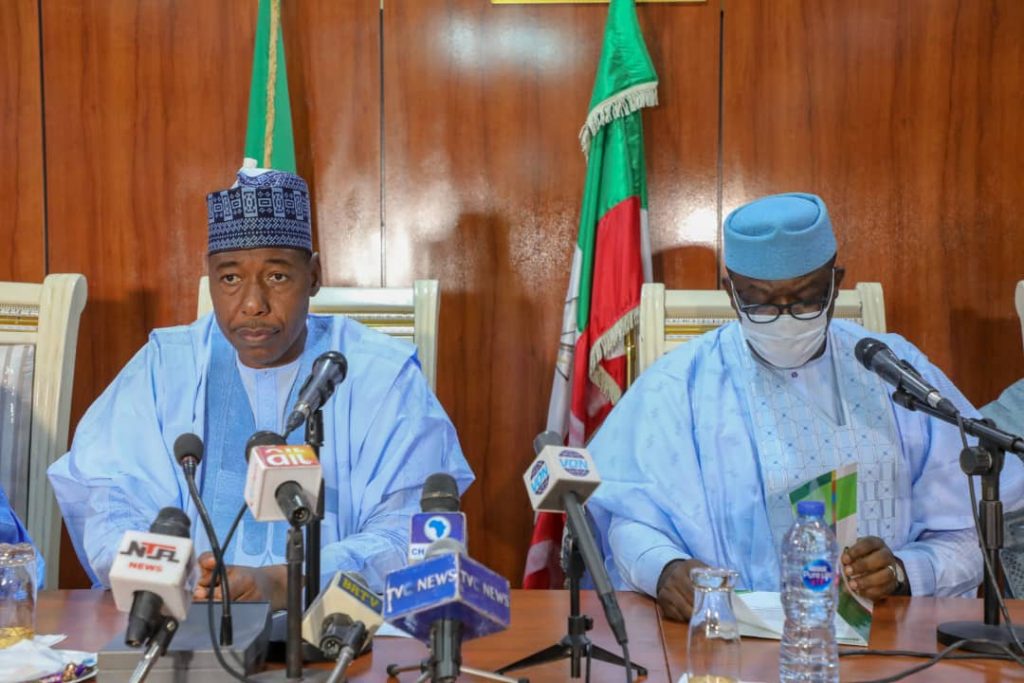 The Nigeria Governors Forum (NGF) has donated N100 million to the people and Government of Borno State to demonstrate solidarity with Governor Babagana Zulum on the recent terror attacks on his convoy. Governor Zulum has promised to be careful as he traverses his State but vowed that he will not be forced to chicken out of pursuing his goals of returning his people to their ancestral homes.

In a statement signed by NGF head, Media and Public Affairs, Abdulrazaque Bello-Barkindo, the Chairman of the Nigeria Governors’ Forum and Governor of Ekiti State, Kayode Fayemi, led the delegation on the solidarity visit to Maiduguri, the Borno State capital.

Addressing the embattled Governor, Fayemi admonished Zulum to exercise caution in his activities in the State, even though he narrated how the Borno Governor always responded by saying that his life was in the hands of Allah and that death will only come when Allah wills.

The NGF Chairman emphasised that Nigeria owes the Borno people a duty to end the insurgency and nip it in the bud. The Ekiti State Governor described how Zulum attempted to dissuade them from visiting his State but he insisted that it is not just a duty but the most realistic thing to do because “an attack against one is an attack against all”.

Zulum, in his response, thanked the NGF for its kind gesture saying it is not the amount of money but the gesture behind the donation that matters.

He explained the dire condition in the State in which the insurgency had thrown the people into.

Zulum, who was in a sombre mood, explained that he would not be deterred from pursuing his goals for the people, saying ‘security and development are two sides of the same coin,’ arguing that Borno ‘people had been forced to be unproductive and depend on aid.’

Painting a very gory picture of the situation of the population in Borno, Zulum narrated that the Chad Basin employs about 10 million people, the Sambisa Grazing Reserve and the Mandara Mountains employ three million people but no one is farming there because the insurgents have made these places inaccessible to the people.

‘The situation in our State has become very dire because, everything calls for endurance, commitment and dedication if our people were to be drawn out of the woods,’ he said.

He further stated that more than 800,000 people are resident in Monguno and all of them are under the age of 20 yet all of that population are idling away, making them susceptible to going astray if nothing is done to engage them positively.

Zulum added that Gajiram Local Government has over 300,000 internally displaced persons, all of them bereft of education and employment before making a passionate plea in which he asked the Federal Government to ensure that Chadian soldiers are invited to join the Nigeria Army in their fight against insurgency if any meaningful success is to be recorded on the battlegraound.

Zulum rationalised that no army in the world has ever succeeded in quelling an insurgency and requested that the Government look into ways of complementing the efforts of the Nigeria Army with the Chadian soldiers, emphasising that it is not to undermine the Nigerian soldiers but to help them in finishing the job within a realistic deadline.