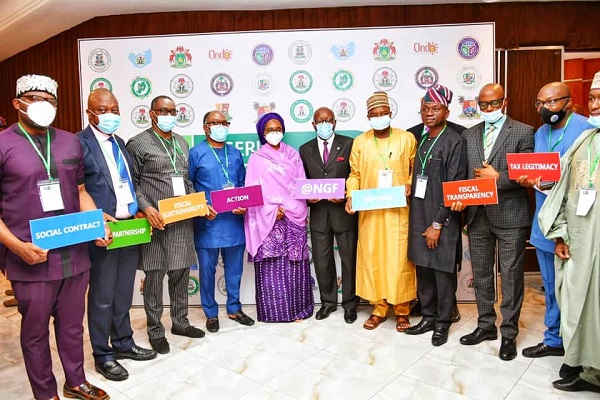 According to him, with the myriad of challenges which he tagged “perfect storm” made worse by the COVID-19 pandemic and the #EndSARS unrest which exacerbated the crisis on an already fragile economy, increasing tax burden on the people was the last thing the chief executives of the states will be pushing for at this time.

‘This year has presented us with a perfect storm of difficulties to deal with – from a health pandemic to the second economic recession in five years.

‘At the wake of the COVID-19 pandemic, the Forum worked with the federal government, international partners, and the private sector to deliver the necessary response needed to contain the virus and ease out its impact on the lives of our citizens.’

The NGF Chairman noted that the government at the federal and sub-national levels, had worked out strategies to cushion the effect on ordinary citizens through various interventionist programmes.

He noted that the decline in oil prices as a result of the global lockdown which was followed by the #EndSARS social unrest worsened the situation.

‘This exacerbated the already vulnerable fiscal environment for governments at both the national and sub-national level. Other accompanying trends have included rising inflation rate, degrading exchange rate and growing unemployment.’

He explained that available records revealed that the 2020 half-year year-on-year IGR performance reported a negative growth of 11.7 percent for the 36 states and the FCT.

The NGF Chairman noted that despite the overall decline, some three states recorded positive growth. ‘The states are: Ebonyi, Gombe and Yobe which recorded more than 50 per cent in growth. I trust these states have experiences to share that others can learn from.’

He further added that he and his colleagues were already implementing a number of reforms to leverage on modern technology to end the regime of multiple taxation and improve revenues.

He said: ‘Other reforms being implemented by state governments under the SFTAS programme and as detailed in the: “COVID-19 Response for Tax Authorities” issued by the NGF Secretariat and endorsed by us at the Forum earlier this year include: ending the contracting-out of tax collections and assessments; increased collaboration between the Internal Revenue Service, MDAs, and local governments; roll-out of tax-for-service initiatives; scale-up of cashless payments; and the deployment of a Geographic Information System to support effective land administration and property taxation. Pivotal to the success of these series of reforms is taxpayer enumeration which is still very much weak.’

In her remarks, the Minister of Finance, Budget and National Planning, Zainab Ahmed, said the impact of COVID-19 on the economic and fiscal revenue outlook for 2021 presents a significant opportunity for states to strategise and reposition your fiscal revenue management systems for this era called the ‘new normal’.

She said: ‘Fiscal reforms are important now, more than ever, to mitigate against current and future risks, bearing any future pandemics or other global crises.

‘The Federal Government has embarked on a fundamental strategy that comprises wide-ranging reforms in its tax policies and administration in the last few years. For instance, the Finance Act 2019 and Finance Bill 2020 have brought significant changes and consolidation to tax administration and management in the country.’

Earlier in his address of welcome, the Director General of the NGF, Asishana Okauru, explained that the NGF Secretariat had on the outset of the pandemic provided advisories to states on taxes and federal revenues including a tax advisory for tax authorities to guide decision making.

He warned that ‘the current economic and social risks are not going away soon. Governments must prepare actively to confront them.”

He said: ‘At the onset of the pandemic, the NGF Secretariat provided two important advisories for states – on taxes and federation revenues – including a tax advisory for tax authorities; and a budget advisory for state ministries of finance and budget which estimated the revenue gap expected from the fall in oil prices and shutdown in businesses. Although very useful, nearly 10 months after, we have seen the emergence of a second wave globally; here, we are starting to record daily cases which are as high as what was recorded 6 months ago. This means that the current economic and social risks are not going away soon. Governments must prepare actively to confront them.

‘This meeting is one of those mechanisms for these discussions – for states to share their experiences about what measures proved most effective during the period of lockdown and after, as well as plans for 2021 to stabilise public finance and incentivise business recovery for jobs, growth and stability.

‘The sessions selected for this year’s meeting will focus on the most important government actions that impact on state public finance today, including the place for tax data in closing the data deficit at the sub-national level to help improve governments’ capacity to respond to the challenges citizens are facing. Unlike economic data which experience lags, tax data provides real time information about the impact of the pandemic that can be analysed daily. We believe that tax data recorded digitally can provide an accurate representation of the cost of the pandemic on the society; It can also provide direction on counter measures required to steer the economy into recovery.’