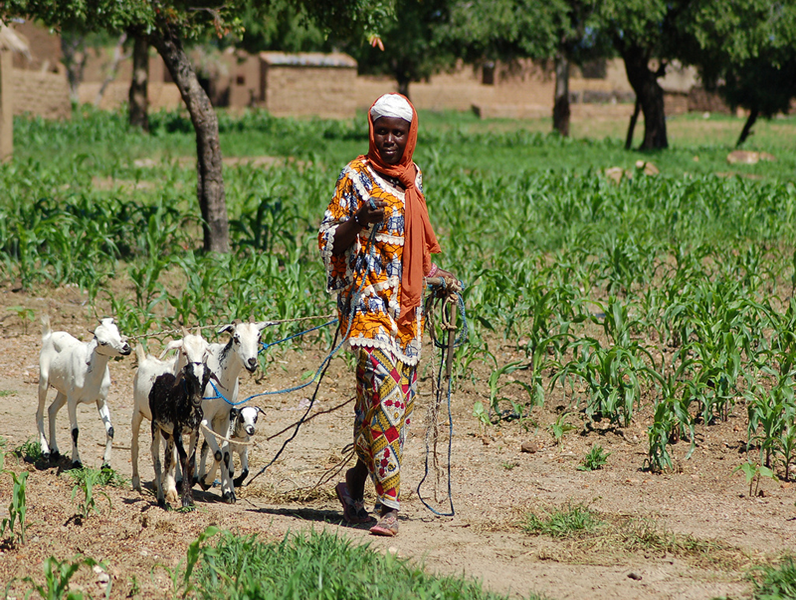 18,000 women are being taken out of poverty in Jigawa State, courtesy of a goat multiplication farming programme introduced by the state government. Daily Trust’s Aliyu Hamagam reports that the goat rearing scheme is an initiative used by many countries in Africa, Asia and South America as a powerful tool to eradicate poverty amongst women.
Aishatu Jibrin is a 22 year old housewife and a beneficiary of the Jigawa State government’s goat multiplication scheme. A mother of four and a resident of Kudai, a suburb of Dutse, the state capital, Aishatu is one of thousands of beneficiaries of the state’s goat poverty reduction programme. Before her enrolment in the scheme, Aishatu was a cap knitter - an art form mostly dominated by women but worn by men.

“I have been knitting since I turned 12 and I have continued even after marriage, but the impact on my livelihood and that that of my family has not changed due to exploitation by middlemen,” she told our reporter. For the mother of four, life has been a little cruel and poverty has become a norm that she and her family may have to live with.

She told our reporter that although she makes between N500 to N700 per cap, and spends two weeks to make one due to her domestic chores, the work has not been able to assist her family as she would have hoped. “I therefore always wished to have something that can make my life and that of my family better,” she said.
So when the goat multiplication programme was introduced by the Jigawa state government sometime last year, Aishatu struggled to get enrolled, and she luckily become one of the beneficiaries of the project when her name successfully emerged amongst those that will benefit from the initial scheme.
“I was so happy when my name appeared among beneficiaries of the initial scheme, and the day I collected my three goats, two she goats and one male. It was the beginning of a dream which I hope will transform my life and that of my family within the next one year.”
Aishatu’s story illustrates the condition of women in Jigawa State, where with a population of 4.3 million by 2010, 47.6% of that population are women. According to the Bureau of statistics, the national poverty indices places the state as the poorest, and, of course, women as the most vulnerable in the state. It is women like this that the goat multiplication programme targets, and about 18,000 of them have so far been identified in the 287 wards from the 27 local government areas of the state.
While glorifying the decision of the state government to introduce this goat multiplication programme, Aishatu hoped other women will be given the opportunity to benefit, so as to take as many women as possible out of poverty. “My hope and prayer is that many more women like me, will be given the opportunity to participate in the programme, so that they can assist their families in taking care of the household like me,” she added.
Already, Aishatu’s three goats have multiplied and she’s hopeful that by the end of the year her backyard will be full of goats, and she will be in a position to expand to 18 goats.
“My hope is to sell by the end of year, so that I can buy many sewing machines and open a fashion business in my village. This is my hope,” she said.
A few kilometres away from Aishatu’s village is another beneficiary. Indo Dahiru is 32 years old and a mother of four. She lives in Limawa, a village few kilometres from Dutse, the state capital. She told our reporter that since the commencement of the goat multiplication project, she has become fully occupied with rearing her stock, that she finds it even more interesting as they begin to reproduce in earnest.
“When I was given the three goats last year I was apprehensive that perhaps they may die, because I have never engaged in goat or any animal husbandry before. But as I got used to it and began to see them multiply gradually, I became more attracted and paid more attention to them,” she said.
According to Indo Limawa the goat multiplication programme has already enabled her to support her husband and her entire family. “I was never a contributor to the progress of the family, because I was helpless due to absence of any trade or business, she said. However, as I became engaged in this project, I can now say without being contradicted that my life as well as that of my family has changed,” she added.

To Indo Limawa her greatest dream is to travel to Mecca to perform the Hajj rites in the next three years from the proceeds of her goats’ husbandry. “My hope is to be able to generate enough from the noble business and afford to pay for my Hajj, Isha Allah,” she hoped.
While hoping and calling on the state government to expand the programme to all women in the state without restriction, Limawa commended the state government for introducing the programme, and called on the beneficiaries to pay attention to the business so that they could pay back by the end of the year, for other women to also benefit.
“This is the first time ever in the history of our state that a government will introduce this type of scheme, which to my understanding and belief is more suited to women, and I am sure will pay us and take many of us out of poverty,” she hoped.
The goat multiplication programme is part of the Jigawa State government’s poverty alleviation initiative that was captured in the 2016 budget, and aims at ridding the state of extreme poverty using agriculture and its resources as a vehicle.

In an exclusive interview with our reporter, Governor Muhammed Badaru Abubakar explained that livestock development is an area his administration targeted in its resolve to diversify its economy, improve women participation in economic activities , and rid the state of the menace of extreme poverty, especially amongst women.
“As you know our state has one of the highest levels of poverty especially amongst women, and this is something we must stop. The easiest and most effective is the goat multiplication programme which we borrowed from Botswana and South Africa where millions of women were taken out of poverty,” he said.
The Governor further explained that millions were invested to buy thousands of goats, so that through a revolving scheme every woman in the state that requires economic independence, will be assisted to fulfil her dreams.
“We chose goats because of its high profit in terms of reselling value, and its capacity and reproductive frequency as well,” he said. The Governor said his administration viewed women as a core area where poverty can be tackled.
As part of this scheme, already one million livestock in the state were vaccinated according to the state Governor’s special Assistant on community services, Hamza Muhammed Hadejia. He told our reporter that the general idea behind the scheme was to provide millions of women and youths the opportunity to rise out of poverty and participate in the economic development of the state in general. He said that a powerful monitoring mechanism has been set in place to supervise the scheme, and ensure both sustainability and repayment so that others can benefit.
Hauwa Umar Aliyu is the special adviser to Governor Badaru, and she told our reporter that the goat multiplication scheme is recognized worldwide leading to its adoption by the Veterinarians without borders, VWb, an international organization based in Canada and working in the area of animal health. She said that due to the significance of goat in the areas of women’s empowerment, the organization launched several programmes on goat scheme in Uganda, Bangladesh, Rwanda and other countries, where it proved successful as a way of removing women from poverty.
“Goats thrive and reproduce without a lot of outside intervention and are central to VWB/VSF’s special approach to community development. Pairs of goats are given to selected families who can raise them and eventually produce three kid goats , which can then be donated and loaned to someone else. It’s a small-scale lending system that uses livestock, a more tangible and relevant currency than cash to many in the Third World. The project aims to empower women, who tend to improve the family unit and the community as a whole,” she explained
Under the Jigawa state programme, a comprehensive marketing plan has been put in place to support the marketing of the goats, by setting up a committee of breeders that are working to ensure success of the programme. “We have set up a committee that is working with the over 18,000 beneficiaries, so that the output of the multiplication project will be marketed and sold at optimum profit.”

Already, the Saudi Arabian government mass animal purchase scheme is being exploited by the committee, so that in the next few years these women will be able to sell their goats to both export and domestic markets.
It is estimated that by end of the year, these 18,000 distributed goats will multiply to over 100,000 and will form a large resource for both the beneficiary women as well as revenue for the state government, when they are finally taken to markets for sale.
“We are sure that in the next few years, millions of women will be taken out of poverty through this project, and as you can see already some states like Katsina have come here and are emulating us by launching the same programme in their state. We are hopeful that this scheme will surpass that of Botswana and South Africa, and soon Jigawa state will become the biggest producer of assorted goats for both domestic use and exports,” Hadejia added.
While the programme attracts wide acceptance amongst women in the state in view of its worldwide appeal, the opposition party in the state described it as a joke and a pointer that the present administration has taken the state backward, especially when compared with the fact that the former government built an airport that launched the state amongst the rising comity of states within the federation. But reacting to this the state Governor, Muhammadu Badaru said: “To this we say that given the option of a plane ride to Abuja and back from the wonder airport at N50,000 and 3 goats at N15,000, our rural women opted for the latter,” he said.