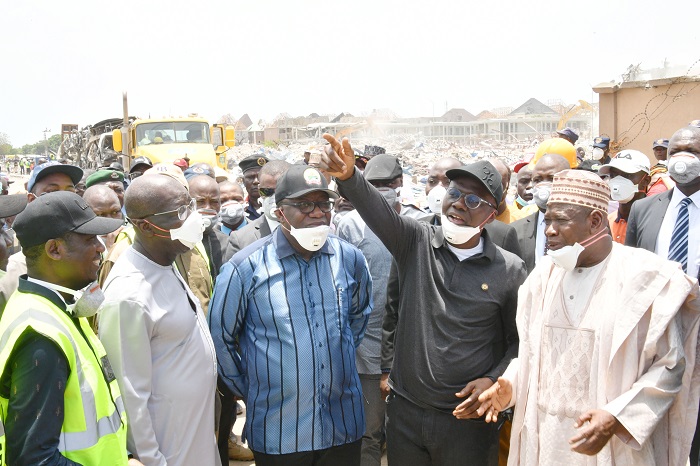 The Nigeria Governors’ Forum has donated the sum of N200 million to the Abule Ado/Soba Emergency Relief Fund set up by the Lagos State government.

The state government had announced the donation of N250 million to the fund and solicited support from all Nigerians, including the private sector.

The Chairman of NGF, Governor Kayode Fayemi yesterday led a delegation comprising his colleagues from Edo, Godwin Obaseki and Kano, Abdullahi Ganduje to the site of the incident in Lagos, where they are meant to do a review of the situation before reporting back to the house at their next meeting.

Fayemi expressed surprise that with the kind of devastation they saw the casualty figure was low, adding that but for the prompt response more lives would have been lost.

He thanked God that few lives that the devastation would have taken was lost.

Fayemi said the sum of N200 million was donated on behalf of the 36 state governors, adding that as the information gets back to the house, there is a likelihood that governors would make more donations according to each state’s capacity.

The NGF chairman blamed the explosion on the disagreement between states and Federal Government on ownership of land while commending the Lagos State government for the attention given to the place, he promised that such issues would be addressed going forward.

The governors sympathised and commiserated with those who lost loved ones and property during the unfortunate incident and hope that this never occurs again.

Earlier, Sanwo-Olu took the visiting governors round the explosion site, explaining in details what led to the disaster and how the state government plans to avert a re-occurrence in the future.

Also in the delegation were the Director General of NGF, Asishana Okauru and NGF’s Head, Media and Public Affairs, Abdulrazaque Bello-Barkindo.