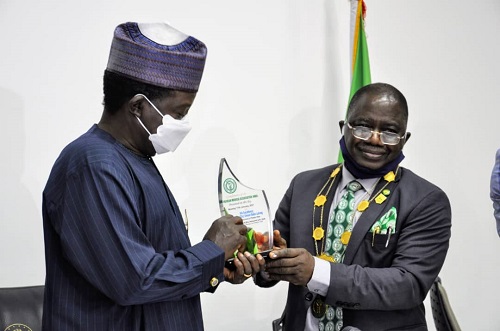 National President of the Nigerian Medical Association, Prof. Innocent Ujah on Monday 11th January 2021 led Executive Members of the body on a courtesy call to Governor Simon Bako Lalong where he scored the Governor high on development of healthcare in the State.

Prof. Ujah who has spent many years in Plateau State teaching and practicing medicine said the Rescue of Administration of Governor Simon Lalong has done what is unique by not only focusing on healthcare infrastructure, but developing manpower.

He commended the Governor for initiating the construction of mega health facilities in the three senatorial districts as well as continuing with inherited work on others which have been moribund for many years.

He said “We are very excited that you recently approved the employment of over 40 doctors and many other health personnel to boost the manpower of the sector. This is inspite of the economic situation of the country and the State. It is also on record that your administration has procured medical equipment for health facilities across the State and ensured that the Plateau Contributory Health Insurance Scheme and the Plateau Primary Healthcare Development Agency were established. This demonstrates your passion for healthcare delivery. We commend you and ask that you do more”.

Prof. Ujah also appealed to the Governor to look into other areas such as the implementation of the CONMESS which is at 83 percent at the moment. He also solicited the support of the Government towards the development of the National NMA Headquarters in Abuja as well as the training of more medical doctors from Plateau State to fill the gap that has continued to widen with the exodus of doctors from the country.

Governor Lalong while responding said he was delighted to have the NMA visit him under the leadership of Prof. Ujah who though originally from Benue State, is now the son of Plateau as he has spent most part of his professional life in the State.

He congratulated the NMA leadership and assured them that the Rescue Administration was committed to providing qualitative and affordable healthcare to the citizens particularly at the grassroots level.

Governor Lalong disclosed that apart from ensuring that health takes priority in the Lalong Legacy project, his administration also ensured that the abandoned hospitals in Riyom, Mabudi and Kanke and others are completed so as to give the people more access to healthcare.

The Governor further explained that his administration also worked for the establishment of the Faculty of health sciences at the Plateau State University Bokkos as a way of ensuring that more health personnel are trained to increase manpower. He disclosed that the construction of the new faculty has gone far as the teaching hospital is also being constructed in Shendam.

Lalong appreciated the medical professionals for sacrificing themselves in the fight against COVID-19 which has seen some of them infected and others losing their lives. A minute silence was observed for those who lost their lives, even as he again called for more sensitization among members of the public advising them to take precaution in the face of the second wave of the pandemic.

He assured them that the State Government was doing everything possible to ensure that the Plateau Health Research team led by Prof. Noel Wannang comes up with home grown solution to COVID-19 and other diseases. The three drugs developed by the team he said have passed pre-clinical stage and undergoing clinical trials before approval by relevant authorities.

The Governor also invited the doctors to invest in the State by establishing medical services as the State if focusing on becoming Nigeria’s headquarters for medical tourism giving its unique weather and hospitality.