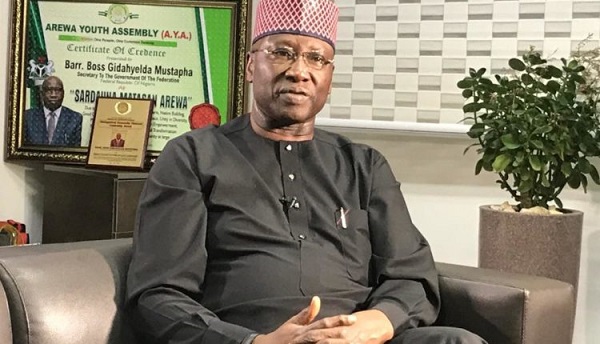 The Secretary to the Government of the Federation (SGF), and Chairman Presidential Steering Committee (PSC) on COVID-19, Mr. Boss Mustpha, says collaboration is key to the success of the Nigerian national response to the pandemic.

Mustapha stated this at the quarterly meeting of the Nigeria Health Commissioners Forum, on Thursday in Abuja.

The Forum’s theme is “Building a stronger health sector in Nigeria through collaboration and strategic partnership”.

The meeting is primarily focused on discussion on how to strengthen the health system at the sub-national levels, with an overall objective of achieving the Universal Health Coverage(UHC).

Mustapha said Nigeria has a system of government, while you have the federal government, the state governments with their separate responsibilities with that of the local government and constitutionally.

“I’m so comfortable that the levels of government have their responsibilities assigned to them, there are some that are executives to the federal government, from the current legislation.

“Those that are shared by the state government and the federal, which is currently slated unless you have a form of partnership between the two types of government, you will find yourself either replicating the same thing or duplicating it even some insights.

“And that would amount to a total waste of resources, but if we are collaborating, you will know exactly what each segment is doing and you will be able to apportion resources proportionately, across the board in different responsibilities.,” he explained.

According to Mustapha, the COVID-19 pandemic came with a storm and exposed the weaknesses in our health system. The story would have been different in the country if not for the collaboration of states and partners.

He noted that this was the best time for the country to recalibrate its health sector adding that there was a need to seize this opportunity to ensure that post-COVID-19, the health system was strengthened.

Mustapha noted that for the national response to be effective, therefore, all stakeholders including the national and sub-national entities must play their roles in a complementary manner because the lives of Nigerians remain very precious and their safety was their responsibility.

“The race against COVID-19 is a marathon and we should never become weary. Research and science have played their parts in taking the battle against the virus to the vaccines stage,” he noted.

Mustapha said that global vaccine nationalism was still ragging but the government has succeeded in accessing millions of doses of vaccines through partnership and diplomatic efforts.

“The acquisition of sufficient doses that will enable us to vaccinate 70 percent of our population is in progress.

“As of date over some million Nigerians-have-been vaccinated-fully. Only recently the second round of vaccination was launched,” he added.

The SGF disclosed that the Federal Government would very shortly unveil its decision on mandatory vaccination for all employees in the civil service.

“One of the reasons why we want to do that with the federal civil service is because they will be traveling on behalf of the nation. Assuming the American government said, you can’t come into their Country unless you’re vaccinated? So you have to be vaccinated.

“So, it’s a sequential thing and we are taking one step at a time, because, we realize we don’t have sufficient vaccine in the country at the moment,” he stressed.

The Executive Secretary, National Health Insurance Scheme (NHIS), Prof. Mohammed Sambo, appealed to the president to accelerate the process of assenting to a bill that had already been passed by NASS which, he noted would help UHC.

Dr. Jeremie Zoungrana, Country Director for Nigeria at Gate Foundation Africa, noted that the country’s response to the COVID19 pandemic had shown that the country had put health at the forefront of its development objective.

Zoungrana added that the Bill and Melinda Gates Foundation would continue to support the country in strengthening the health system.

Dr. Olumide Okunola, Senior Health Specialist at the International Finance Corporation of the World Bank Group, said that all the State commissioners of health have gathered here today to make sense of all the complexities around the country's health sector.

In her remarks, the Commissioner of Health of Cross River, who doubles as the Chairman of Nigeria Health Commissioners Forum (NCFN), Dr Betta Edu, said that they were here to discuss the way forward for the health sector at the State level.

Edu further added that they would not see changes in the Nigerians health indices if the states were not actively involved.

The meeting is broader around health issues such as the Basic Health Care Provision Fund; strengthening Primary Health Care;HIV/AIDS control with its multisectoral consequence; UHC, Health Insurance, as well as various high impact interventions being implemented either directly or with development partners.

The meeting is expected to identified challenges and implementation of partnership support at the subnational level would be outlined and measures to address them articulated and agreed upon by the end of the event.