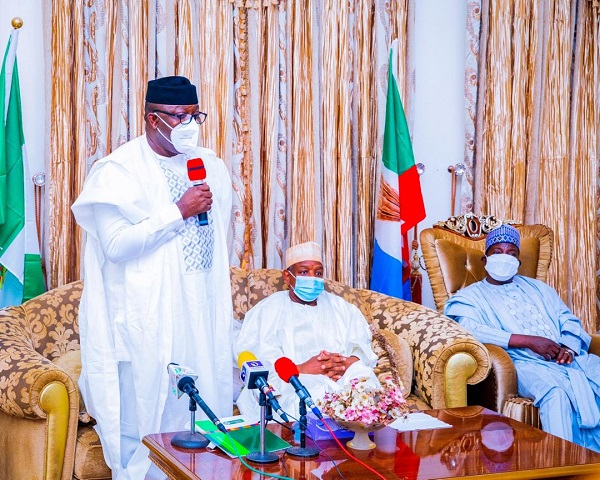 The Nigerian Governors' Forum (NGF), on Monday, donated a whopping sum of N50 million naira to the families of those who lost their lives in the recent boat mishap at Warrah, Ngaski Local Government, Kebbi State.

The Chairman of the Forum and Ekiti State Governor, Dr Kayode Fayemi announced the handsome donation, when he led a delegation of the forum this Monday on a condolence visit to his Kebbi State counterpart and Chairman of the Progressives Governors' Forum, Senator Abubakar Atiku Bagudu.

Fayemi said:" This donation is on behalf of your brothers, the Governors who were shaken by the unfortunate accident in Yauri Emirate ,the boat mishap that led to the loss of lives and properties, while several others were injured.

' That is why your brothers, the governors have decided, I on behalf of them donate N50 million to the families of those who died in the unfortunate accident .

" Everyone felt particularly sad at this development and we are here to condole you, the families and the people of Kebbi state .

We, of course,are not God. The Almighty Allah knows best . He has the insight, foresight, knowledge and He knows why things happen like that ,while we , mere mortals do not know."

Fayemi beseeched the Almighty Allah to repose the souls of the deceased,as well as give the bereaved families, Govenrment and people of Kebbi State, the formidable fortitude to bear the irreparable losses .

According to the NGF Chairman, the incident was not only a personal tragedy, but, a statewide tragedy, as well as a national one.

He said," we know when such calamities happen,there must certianly be fall outs and that is why we are making this donation to the survivors.

" As Governors, it is a matter we must draw lessons from. Emergency services must be strengthened , to respond appropriately when the need arises.

" So that we can avoid this, where necessary, draw the necessary lessons and also ensure that, these boats are not overloaded while on shore.

" We are also praying the Almighty to prevent the recurring of this sad and unfortunate incident in the state and other parts of the country."

Responding, Bagudu commended them for the condolence visit , as well as the donation of a whopping sum of N50 million , saying ," we are quite pleased and honoured with your esteemed presence ."

The Kebbi State Governor also happily recalled similar visits by his Sokoto, Katsina and Zamfara counterparts,as well as the donation of N40 millon and N30 millon , by the Sokoto and Zamfara Governors, respectively.

Bagudu further expressed delight with the exemplary show of love to the people of the state by President Muhammadu Buhari, all the Governors and a cross section of Nigerians, of all classes and status.

" We are also really consoled with the avalanche of help, with many people donating their boats , to bolster the search and rescue operations, as well as such mind soothing efforts by many agencies , governmental and non governmental, among others," he added.

Bagudu lamented the absence of a passengers' manifest in the ill-fated boat, decryiing that, this ugly development aggravated the unfortunate situation.