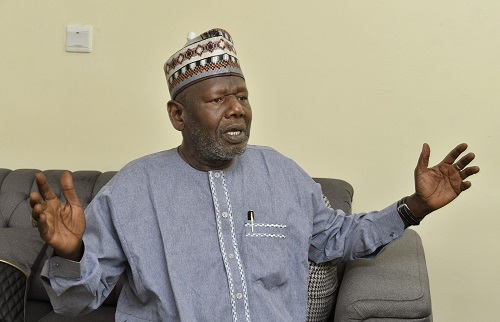 Professor Abba Gambo comes to the Nigeria Governors’ Forum as the Senior Agricultural Advisor. Abba Gambo has always had a deep love for Agriculture. ‘‘My mother had a small garden within the palace so that maybe triggered me into Agriculture." The majority of his family members were all farmers.

From his academic days, he continued to develop himself in the field of Agriculture which garnered him great respect and consequently a demand for his high expertise.

In this candid interview with the NGF media team, he elaborates on his education/background, career, and his new role at the Nigeria Governors’ Forum Secretariat.

Tell us a bit about your background: (Education & Career)?

I attended the University of Maiduguri where I became the very first Horticultural Graduate. I then did my National Youth Service Corps (NYSC) at the deformed Gongola State before it was split into Gongola and Taraba.

I got admission into the University of Ibadan for my Masters, MSC in Agronomy. I passed out with flying colors and gained automatic admission for Ph.D.
I was admitted to Usmanu Danfodiyo University Sokoto for my Ph.D. where I finished my degree in record time. It took me only three years.

What do you bring to the table that is different from the past?

First, I want to commend the management and staff for being here at the beginning. We started with a small office, and it has now expanded and there are meeting rooms where Governors can come and discuss.

Secondly, I come at a time when there is a global food crisis. The Russian and Ukraine war is affecting the production of wheat. These two countries produce 50% of the global wheat in the world.

Because of the war, that 50% is lost. Now, 45 countries are dependent such as Saudi Arabia, United Arab Emirates, Egypt, Burkina Faso, and Nigeria.

Out of the 45, 18 are developing nations. Now, due to the war, the farmers are all on the battlefield. There is also a sanction on Russian products.
Then, the second alternative is India that is producing plenty of wheat.

Then, countries turn to India, and suddenly, India says they are not exporting one grain of wheat until December of 2022. So, the price of bread in Abuja you initially bought from N150 to N200 is now selling for N900.

Now, what I want to do is bring a solution to the wheat crisis in Nigeria. We have identified the areas in Nigeria that produce wheat. We want to do a national roundtable on wheat as quickly as possible in conjunction with agencies such as the Federal Ministry of Agriculture, the Central bank of Nigeria, and all the states and commissioners so that we fill the gap.

We have a huge gap of 6 million metric tonnes to fill. We must start thinking and talking about this challenge so that we can go practical. The second issue is that I want to gear up and give results as quickly as possible.

Also, the Agricultural Research Council of Nigeria has given us plenty of agricultural materials.