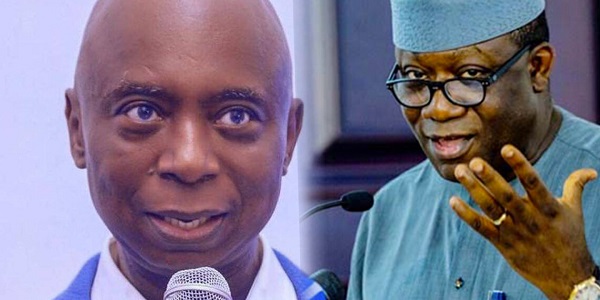 The Nigerian Governors Forum (NGF) has accused Ned Nwoko of spilling half-truths regarding the Paris Club Refund. The governors said the facts on the “fraud” associated with the Paris Club refunds can never be changed by a press statement by Mr. Nwoko, the Attorney General, Abubakar Malami, or any of the consultants.

The NGF was reacting to a recent statement by Mr. Nwoko, who claimed his firm, Linas International, was being owed $68 million and not $418 million as stated by the NGF.

In a statement on Friday, Mr. Nwoko who is the lead consultant for the recovery of over-deductions from Paris and London clubs debt buyback funds said part of the fees owed his firm for services rendered had fully been refunded and the outstanding fees owed with regards to last work done for the states is “approximately $68 million and not $418million as maliciously sought to be conveyed by Kayode Fayemi, the NGF chairman.”

Controversies have trailed the Paris Club refund to states and local governments in recent weeks.

Prior to Mr. Nwoko’s statement, NGF wrote to the federal government and argued that an attempt to restart the deduction process, which is in Courts and for which the Supreme Court has made a pronouncement, would be unconstitutional.

The president, in turn, directed the Minister of Finance, Zainab Ahmed, to suspend plans to begin the deduction of the $418 million Paris Club refund allegedly owed the consultants from the federation account.

But Mr. Malami would go on to say the NGF had no basis to reject the proposed deductions.

The governors, he said, originally created the liability whose payment they had also indemnified and had no reason to “make noise.”

Days after his comments, the governors said Mr. Malami is acting in his selfish and personal interest. They described it as illegal Mr. Malami’s plan to deduct the sum because the case is still pending in court.

The NGF also constituted a committee comprising Mr. Fayemi, Governors Rotimi Akeredolu of Ondo State, Abdullahi Sule of Nasarawa State, and Dave Umahi of Ebonyi State – to interface with the committee set up by President Muhammadu Buhari to review the matter.

This was contained in a statement by Abdulrazaque Bello-Barkindo, Director, Media, and Public Affairs at the Nigeria Governors’ Forum Secretariat.

The NGF said while he tried to single out and justify his $68 million, the total amount which all the consultants working in concert, collectively seek and claim from the states and Local Governments – albeit unlawfully is $418,953,690.59 broken down as follows:

The attempt by Mr. Nwoko, the NGF said, to separate his own claim of $68 million as though not related to the claims of other consultants is being clever by half.

“In his desperation to justify his claim, Mr. Nwoko peddled untruths that his team was a member of the Federal Government Committee constituted to reconcile figures under the Paris Club refunds to the States and Local Governments. That is patently false. The report of that committee dated May 2007 shows that only the FMF, OAGF, CBN, DMO, and RMFC (secretariat) were members. Private persons who were not privy could not have been included in a committee that was meant to examine purely public financial records. It was this Committee that did all the work now claimed by NED and the other consultants,” the statement said.

The Forum challenged Mr. Nwoko to approach the necessary authorities to bring to justice any person or persons (including himself) who were allegedly involved in misappropriating public resources for campaign financing.

It also denied being involved in or being in receipt of $100 million or any other funds from Mr. Nwoko to finance elections in any state.

While the Forum vowed to remain focused and determined to diligently pursue all appeals on the judgments on the Paris Club refunds, it asked the AGF and the consultants to allow the appeal processes to run and be exhausted.