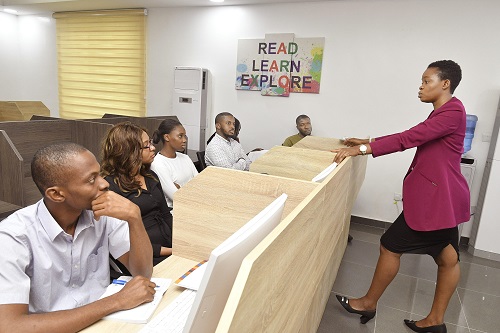 Naomi O. Tietie, Senior Librarian at the Nigeria Governors’ Forum Secretariat has spent three years and seven months in her role and has recently gone on a study leave to pursue a Master’s Degree in the United Kingdom.

Before she left, Naomi took National Youth Service Corps (NYSC) members around the library as she showed them the various sections of the library shelves, such as the reference section, new arrivals, the reading section, the bookshelves section, and then, the relaxation lounge.

She also provided needful training for five new corps members on managing the library and obtaining access to all the resources the library offers. As part of her presentation, Naomi stated it is important to know what the library entails.

Her words: “A library provides specialized information resources, and it is a hub that collects, stores, preserves and disseminates knowledge resources in print and digital formats,” stating that though the corps members are coming in newly, they are seen as more than corps members.

“Corps members are seen as research analysts and would be expected to perform research and carry out reports for the NGF,” she said.

In addition, Naomi let the corps members know that though all staff has access to books and resources, there are policies that guide getting books.

“Before one takes a book, you’d have to notify the librarian and, when someone wants to make use of a publication, they must notify the NGF,” she told the rookie corps members, adding that they should make the most of the experience they have while at the NGF.

She stated that in the past, corps members have done the research and written articles for the NGF Magazine. Specifically, Elizabeth Vera Cruz and Endurance Igbru wrote a piece called ‘‘Beyond Begging,’’ in the Executive Summary magazine of Vol 1. No. 20. Of March 2020.

‘‘There are many departments that you can contribute to in the NGF. It could be education or health that you write about and then proofread and publish,’’ said Naomi as she advised the present Librarian, Ogboh Ruth Kelechi that it is important to know how to manage the library space and to “be on your toes.”

She stated that sometimes, proposals come in and it is the duty of the Librarian to review the documents and further advised Ruth that when there are NGF events, it would be good to come back with books and documents from the event.

Regarding the main priorities for the new librarian, she said it matters to be up and doing, to attend to patrons, and to take a tour of the library. To attend book launches and key activities to purchase books.

Secondly, she should ensure that there is a proper recording of documents to notify staff through emails of the ‘‘New Arrivals.’’

‘‘What matters most is the continuous building of the E-library and to have materials that need to be cataloged,” she said, stating that though she would be away on study leave, she would always ensure the provision of virtual assistance to Ruth.

As to whether there would be any challenges that Ruth has faced, she affirmed that the new Librarian has been well-trained to tackle challenges. However, she still encourages continuous learning.

‘‘I always encourage Ruth to learn and go for training. I believe there is always more that she can do.’’

She believes that Ruth can do more and possibly expand on her ideas for NGF such as the idea to have a book club where secondary school students can have readings.

‘‘We have chairs, tables, and computers. The essence of having a library is to showcase and introduce educative games like scrabble,’’ said Naomi. As to what she would miss most about the library, Naomi said she would miss the quiet space and the in-house patrons and how the library space has brought a sense of fulfillment.

She stated that one of the best compliments she received was when a Bayelsa representative from the Bayelsa State Insurance Scheme toured the library and commended the facility as providing access to the most up-to-date information.

That he would want to replicate it. Stating she has gotten used to the space as a place where she can learn every day, she hoped that the new librarian, Ruth coming in would do more. Ruth states that she is ready to take on her new role and that she is not really new to librarian work as she studied Library and Information Science at the university and that she is glad to be at the NGF because she believes it is a good place to work, learn and explore.

In addition, she added that she has been well trained by Naomi as she put her through cataloging and the backend. How to upload articles, the communique, and how to handle the library’s digital equipment.

A corps member who has worked closely with Naomi and various departments at the NGF is Joseph Uzochukwu who stated that prior to the NGF, he had no experience at the library but during the few months he spent with her, he learned a lot.

‘‘She is a good teacher and mentor. I truly appreciate her. She has put me through a whole lot,’’ he said. In his time spent learning from Naomi, he understands how the library functions, cataloging the use of digital signage and the use of library software.

He further stated that Naomi has trained him well and he would be happy to continue working at the NGF secretariat after his service year.
“The Nigeria Governors’ Forum is doing a great job in its onboarding process with corps members. From my interview to the first few months, I’ve stayed here, I’ve built my confidence from the meetings I’ve attended and through working with the various departments from the ICT unit to Education, Agriculture, Economics, Legislative Unit, and media,” he revealed.