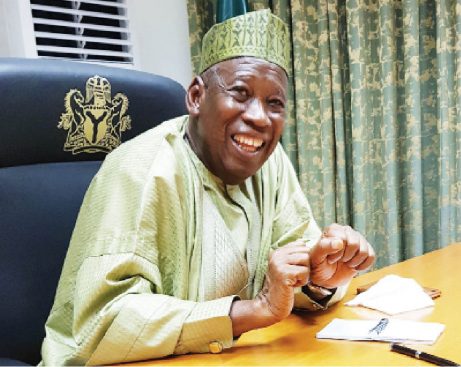 Governor Ganduje highlights the significance of the Conference that, "...this Conference can best be appreciated through recognizing the nexus that exists between having a secure maritime domain and the socio-economic development of the nation."

Adding that, "The Nigeria's maritime environment is known to hold a good percentage of Africa's oil production and significant percent of the continent's proven reserves.

It is a major source of food stock and supply, as it boasts of some of the continent's riches and abundant fisheries, a vital source of protein need, consumed locally and internationally."

After mentioning the significance of the Conference, he also gives out the impact of maritime insecurities as being hard on economic livelihood, prosperity, peace and stability of Nigeria.

He aptly captures that, the Conference symbolizes a strategic collaborative initiative between the Nigerian Navy and other maritime stakeholders.

Adding that, "This Conference also presents a potent strategy to espouse measures to mitigate the increasing maritime insecurities in the immediate environment in order to enhance economic development of the country."

While commending the Nigerian Navy, he also showcased few interventions the state is linked with, on how the security of the state is improved, of which he made mentioned of his ability in constituting a Joint Task Force on Security, which comprises Military and Paramilitary organisations, that helps in working out good synergy in handling security issues.

Another intervention is, "Deployment of Information Communication Technology (ICT) approach to tackle the menace of kidnapping and other criminalities through the use of one of the best tracking devices in the country."

"We have also established a robust community policing in the state where we set up Committees at various level to facilitate effective implementation of the scheme.

Our revered traditional institution, our Ulama and other stakeholders have been deeply involved in the scheme as reflected in the 5-Layer Community Policing Structure we have in the state," he mentioned.

On his part, the Chief of Naval Staff, Vice Admiral Garba, commended the state government for the good reception and support in holding the Conference.

He made it very clear that, the Nigerian Navy would do its best to see to the fruitful deliberations in the three days of the Conference. To also come up with implementable resolutions.