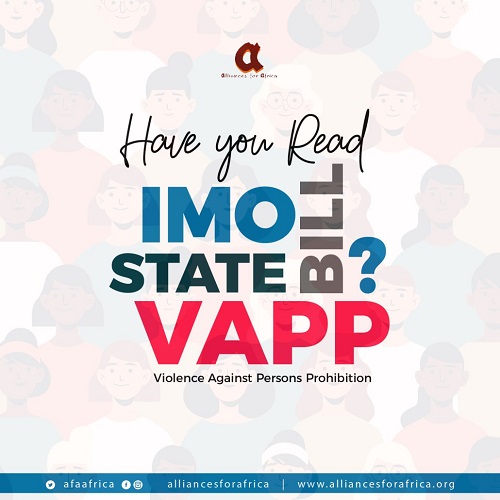 A bill for the domestication of the violence against persons (Prohibition) Act, VAPP Act has scaled through third reading in the Imo State House of Assembly.

The bill, sponsored by Mrs Uju oOnwudiwe, representing Njaba state constituency in the assembly, passed the third reading during the plenary session.

Speaking to newsmen after the session, Onwudiwe expressed delight over the passage of the bill, adding that it would become law when the governor accented it.

She said that her decision to sponsor the bill was borne out of a desire to stem the tide of girl child abuse and seek justice for victims of abuse.

Onwudiwe thanked other legislators for being part of the making of history “and expressed confidence that Imo will soon join the list of states that have domesticated the Act”.

She thanked Governor Hope Uzodimma for his gender-friendly style of leadership and pledged continued support for initiatives that will checkmate violence against girls and women.

“It is regrettable that our forefathers believed that the girls whose genitals were not mutilated would end up wayward; that is a wrong notion and it forms part of what we want to correct with the domestication of the VAPP Act in IMO,” she disclosed.

Onwudiwe added that “the ninth assembly is one with a human conscience and I thank my colleagues for their various contributions thus far.”

In his remark, the state Commissioner for Women Affairs and the Vulnerable groups, Mrs Nkechi Ugwu, commended the United Nations Children’s Fund (UNICEF) and the National Orientation Agency (NOA) for their advocacy efforts.

She called for continuous advocacy and enlightenment by relevant government agencies and non-governmental organisations.

This she said would be necessary to consolidate on the gains of the act when it eventually gets domesticated.

She also thanked the governor’s wife, Mrs Chioma Uzodimma, for supporting the passage of the bill and assured that a sexual assault referral centre would soon be established in the state.

The commissioner stated the need to be consistent in awareness creation about the dangers of all forms of violence against women and girls so as to sustain the gains of these efforts.

She called on all relevant stakeholders to aim at increased awareness especially at the grassroots as this will go a long way to stem the tide.