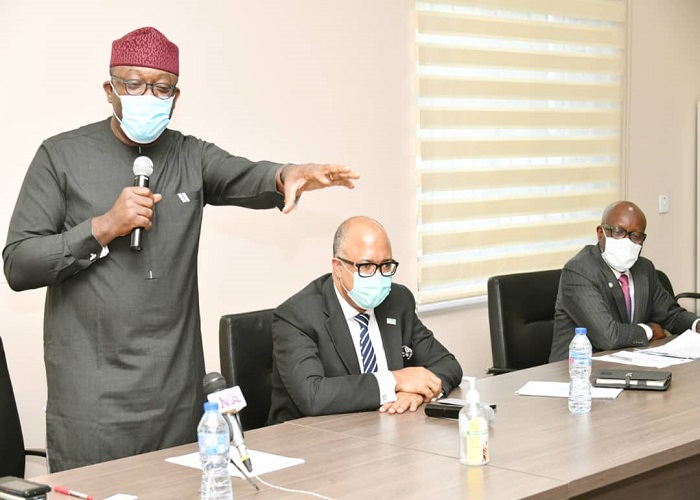 The Nigeria Governors Forum (NGF) and the Nigeria Centre for Disease Control (NCDC) on Wednesday signed a Memorandum of Understanding on the World Bank N3.7 billion COVID-19 response suport to states and the FCT.

Each state will access the sum of N100 million once it meets the criteria outlined by the NCDC, which include submission of quality Incident Action Plans (IAP), open an account and submit the details to NCDC on the letterhead of the Account General of the State, warning that submission made via email will not be honoured.

The funds is to enable access the fund, which would be paid directly to a dedicated account of each state government.

The two facilities provided by the World Bank to support the country’s response through the NCDC are the Regional Disease Surveillance Systems Enhancement (REDISSE) project and the Nigeria COVID-19 preparedness and response project (NIGERIA CoPREP).

The REDISSE project is a five-year project with the objective of strengthening the country’s capacity for disease surveillance, laboratory strengthening, preparedness and public health emergency response capacity. It is jointly my implemented by NCDC and the Federal Ministry of Agriculture and Rural Development (FMARD).

The NIGERIA CoPREP on the other hand is a N100 million fast track facility under processing which will provide support to all the 36+1 states.

The Project Development Objective (PDO) is to assist the country prevent, detect, and respond to the threat posed by COVID-19 at the state level.

He said before the outbreak of COVID-19, the strategic direction of the NCDC for the year was to support the states to build their health capacity even without knowing where the resources will come from.

Ihekweazu, said sadly, faced this incredible challenge of the pandemic, everyone has come to the realization that they have to build their health infrastructure and that can’t do that from Abuja but from the states and local government.

He said it was a collective agreement to use part of the REDISSE fund to accelerate the development of the health sector.

He said the process has been ongoing but not as rapid as the NCDC would have loved it to be.

Ihekweazu, noted that first steps are always difficult but that the NCDC believes that subsequently, the focus will be on the states to get the funding to respond to the outbreak, while the center focuses on building the capacity.

The Operations Manager of the World Bank, Kathleen Whimp, in her remarks, said there is a saying in the bank, never let a good crisis go to waste, noting that the signing of the MoU is an opportunity for the NCDC to realize its vision, to reach out further and strengthen its engagement with states.

She said the cooperation is not just about addressing the outbreak but forging links between federal and states governments, which is critical for Nigeria’s development.

She said even though politicians are needed, a stronger agency leadership is are more needed to drive the process because its the service delivery that really matters.

Whimp also commended the chairman of the NGF and Governor of Ekiti State, Kayode Fayemi, for coordinating the states effectively.

The chairman of the NGF and Governor of Ekiti State, Kayode Fayemi, commended the NCDC for helping the states to prepare for the future.

He said pandemics will come and go but the states preparedness is what will make the difference.

He said sub-national are very critical pillars in development agenda of any nation, particularly when it comes to public health.

Fayemi insisted that the states are the critical end with which the pandemic must be comprehensively tackled.

He said the NCDC has supported the states with a while expertise, technical assistance and partnership.

He also thanked the World Bank, for being a great partner to the NGF, adding that Ekiti state alone has 10 World Bank projects currently ongoing.

Fayemi said: “For is, we see the World Bank and a partner and not as a donor. In any case it’s our money that is being given back but is something that they are doing genuinely with commitment to the development in our country.”

He confirmed all the supports extended to the states by the NCDC, saying that even though the governors have not always agreed with NCDC on how to manage the partnership on and REDISSE and NIGERIA CoPREP

The project coordinator, Kemi Ladeinde, presenting the update on NCDC supports to states on COVID-19, said before now, REDISSE project has been supporting the states in the area of surveillance, information management, strengthening laboratories capacity, emergency preparedness and response and strengthening human resource.

She said the center recently provided support to states emergency operations centers which include 20 vehicles, alternative power supply to 10 states centers, ICT to 10 states centers, ongoing procurement of laboratory equipment and reagents and procurement of personal protective equipment and other medical supplies for treatment centers across the country.

Ladeinde, said the next level of response plan at the national level, is to build new treatment centers in five state and identify more states that will require the support. Procurement of ambulances for point of entry, treatment centers, provide vehicles to the additional centers and alternative power supply and ICT to facilitate the function of the centers as well as allocation of N100 million to each state.

She said the decision to allocation N100 million per state was communicated to states on May 2nd and was followed by a template on May 15th to assist the states prioritize their activities for the response and orientation on how to complete the template was done on May 18th and the World Bank approved the grant agreement on June 11th.

She said so far, 34 states have submitted their prioritized plans for the use of N100 million with except or Lagos, Yobe and the FCT. Five states have so far been cleared by the World Bank and the grant agreement has been deployed to Gombe and Zamfara states, with Zamfara being the only one that has sent back the signed Grant Agreement.

The project coordinator said, the grant agreement is ready for Ekiti, Sokoto and Niger states, while the plans for five states – Plateau, Benue, Katsina, Rivers, Kaduna, have been recommended to the World Bank for No Objection.

She said 24 states are at different levels of review with the NCDC or states.

Ladeinde said: “What we try to do is to ensure that the states can submit plans that will be funded by the World Bank. We have 19 that was submitted to the NCDC, nine are with us, 10 have reviewed and sent back to the states concerned, four submitted their plan on wrong template and one just submitted yesterday (Tuesday).”

She said to ensure all the states are looked at from the same lens, the states must comply with the listed criteria.

The criteria include alignment to prioritized activities that has been provided by the NCDC for the states to develop; use of approved template to submit plan, proper costing of the specified activities at the emergency operations center (EOCs), units costs are within reasonable limits to ensure transparency on the way they deliver on activities, funding sources (other sources from development partners outside World Bank), funding budgets must be within the stipulated limits of N100 million, coordinations of the state plans with development partners at the state level.

Ladeinde said states that submitted a budget plan over N150 million will be returned.

On the requirements for assessing the funds, she said each state must submit quality Incident Action Plans (IAP) based on the criteria listed earlier, open an account and submit the details to NCDC on the letterhead of the Account General of the State, warning that submission made via email will not be honoured.

She said: “Submission is account details should be communicated through the accountant general’s office, that is the right way to go. Then the signing of the Grant Agreement with compliance with COVID-19 response strategy including testing, contact tracking, active case search and all the activities that we have identified that will enable us respond adequately to the COVID-19 pandemic.

“The next steps will be for us to disburse to states following the signing of the Grant Agreement and we will work with states to meet that last criteria, that is compliance with COVID-19 strategy so that they will access funds.

If there are states that are not doing contact tracing and the likes, we will like to discuss further before releasing the funds. We want to work with all the states so that they can access their funds.

“We will work with other states that we are still working on their plans also to ensure that they access the funds. We want to try facilitate that so that all states can access their funds.

We will also be working with the World Bank so that we can have timely effectiveness of the second project we are working on, that is the Nigeria COVID-19 preparedness and response project (Nigeria Co-PREP) after World Bank Board Approval.”