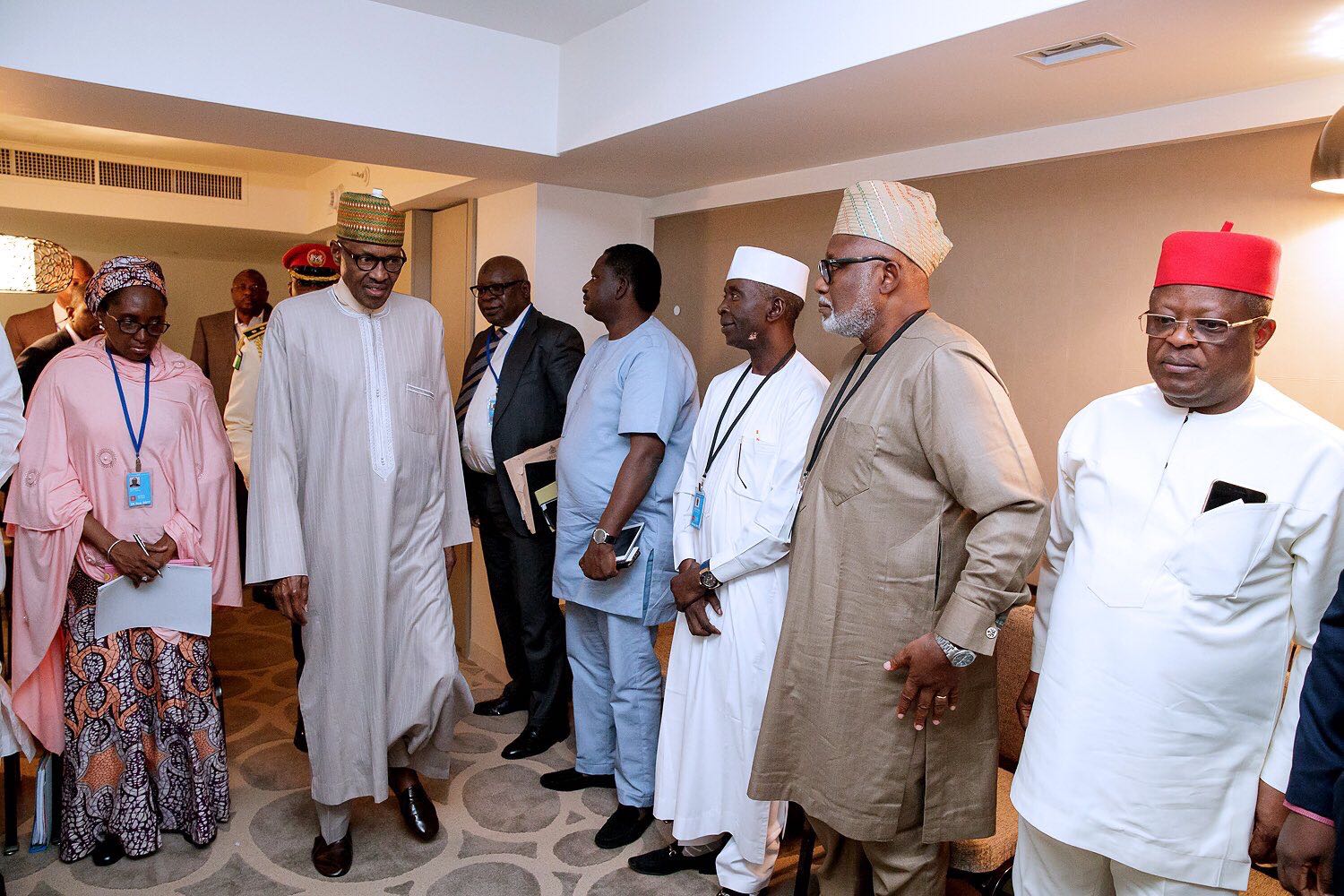 Every year we gather here to deliberate on the affairs of the world. Sometimes we implement what we talked about and move humanity an inch closer to that ideal relationship as members of the world community. At other times, we have our talks and end up not implementing anything to the disappointment of millions and millions of people around the world who look up to this body to provide leadership in a world that is constantly oscillating between advancement and doom. In all of these, we often forget that what we have accomplished in the last 72 years is unprecedented in the annals of human history. The world may be badly governed, but the fact that there is a form of governance agreed upon by all is an accomplishment in and of itself. So, I congratulate us all.

Mr. President, as we say in Nigeria, he who does not look ahead remains behind. Our charge now is to aspire to make this world better for the next generation. We, the generation that knows how the world was before the United Nations was formed, must bequeath to those coming behind us a better United Nations that would be in a position to deal with the challenges of tomorrow. To accomplish that, we need to fast forward the reformation long proposed in this chamber.

To restructure or not to restructure is no longer the question – the United Nations must be restructured for it to remain relevant in years to come. How to restructure the United Nations should be our priority number one. Several ideas are out there. All that we need is to get them together and agree on what works for majority of the people of this world. As a leader of one of the leading African nations, I want to see a United Nation’s Security Council that is expanded to have one or two African permanent members with veto powers. It is a fair thing to do – one that will benefit the world by giving it a chance for a more balanced outlook to matters of importance to us all. As we have learned in Nigeria, sometimes you need to change in order to remain the same. It is the first principle of renewal.

In the continent of Africa, the post-colonial era is going into a new phase. In another generation, there would not be any African alive who could remember when European powers once governed Africa. That emerging generation is creating new challenges for the African order left behind by the colonial powers. My generation is managing that challenge with the hope of leaving behind nation states that are less prone to crisis. We cannot continue to pretend that conflicts that emerged as a result of our colonial heritage have been resolved. Across our continent, they are still there. In some cases, bad governance is exacerbating these conflict points.

Here are some of the things we are doing to make sure that we bequeath to the upcoming generations of Africans a continent that is healthy, wealthy and well grounded in law and order. We are close to enshrining in the African Union’s creed the fundamental principle of democracy, which says that a credible people’s mandate should determine who governs any nation across Africa. We are taking it a step further by pushing to make that mandate limited. We believe that Africa has numerous talents and no man or woman should be in the leadership saddle for an inordinate time. We are also working hard to expand the African market and open it up for our people to benefit from the free flow of goods, services and knowledge across the continent. It is the only path to prosperity for over one billion people in Africa yearning for opportunities to show the world the potentials they have.

As Africans, we will continue to build partnerships across the world. As we stretch our hands out for friendship, we do so with the expectation that our hands would be met not with pity and charity but with respect and dignity. Africans have a lot to offer the world, not just its minerals and human potentials. We are committed to resetting that old perception with a new one that proclaims Africa as a land ready for business. Those who have taken the steps to invest in Africa can attest to the mutual benefit that comes with it.

In areas of infrastructural developments, research and security, we urgently need a respectable and mutually beneficial partnership with the world. Integration of the continent and expansion of prosperity can only come when there are good roads, constant electricity, clean water and descent healthcare for our people. The United States government, The European Union, private investors and non-governmental organizations are getting involved in these ventures. Africa will continue to welcome the world in every enterprise that will uplift our people.

It is only when we add value and build capital that we will reduce the grim statistics of Africa’s child mortality rate from preventable deaths. It is only then that we can reduce deaths on the Mediterranean Sea of African youths running away from conflicts and poverty. The challenge is ours. We accept the responsibility. As in the past, we know that we do well when we share skills and expertise. That was how we were able to work together with partners around the world to reduce the AIDS epidemic. That was how, in the last two decades, we were able to defeat diseases like polio, tuberculosis and ringworm in several parts of Africa. Africans have always been appreciative of the assistance we receive. We have also paid back to the international community with our involvement in Peace Keeping missions across the world.

Mr. President, on matters of security, there is no gainsaying that when one part of the globe is insecure, all parts of the globe become potential victims of that insecurity. The activities of several extreme groups jeopardize not just the nation where they emanated but everyone far and in-between. The free movement of fighters and weapons has all but made the issue of security a global problem. As we have learned in Nigeria, you compromise the security of the whole when components of the sum are not fully valued, appreciated and integrated with the whole.

We in Africa have been partners in the quest for a secure world. We will continue to be committed to the mission until all threats to peace across the world are eliminated. In Nigeria, we have degraded the capability of the Boko Haram terrorist group. We are on the path to eliminating the last of their safe heavens. We have also secured the release of some of our abducted Chibok Girls. We are working hard to secure the release of the rest and to finish the job of closing the Boko Haram chapter and get the North East of Nigeria back to a peaceful region that it used to be.

Along this line, Mr. President, we at the United Nations need to do more to bring about a more equitable world where a large group of people does not feel suppressed, undervalued and alienated. Last year, I talked about the need for Palestinians to have their own state. Progress has not been made on that matter in the past one year. It is one of those problems that we must not punt to another generation. Any glaring unfairness, like the Palestinian case, diminishes our moral authority to preach and lecture the world on other cases. As we have learned in Nigeria, our stubborn self-righteousness blocks our ears from hearing the cry of those that we left on the fringe of society and blocks our eyes from seeing and reading the handwriting on the wall.