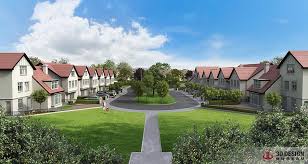 President of the Dangote Group of companies, Alhaji Aliko Dangote, yesterday commissioned a N2billion housing estate he built for Internally Displaced Persons in Borno State.
Speaking while commissioning the housing estate at Dalori village in Konduga Local Government Area of the state, Dangote said, in Borno alone, the Dangote Foundation invested N2bn for construction of 200 befitting housing estate to IDPs, in addition to provision of food and other relief items since 2012.
He also said the foundation has so far invested N7bn to create jobs and end hunger in the north east states of Borno, Yobe, Adamawa, Taraba among other states where millions of residents live in Internally Displaced Persons (IDP) camps.

“I am very grateful to witness this important occasion which marked the official commissioning of 200 housing estate, and newly constructed Primary Health Care Development Complex built by Dangote Foundation in partnership with Borno State Government.
“Since 2012, Dangote Foundation has been supporting the North East, particularly Borno, and has spent about N7bn as part of effort to ameliorate the sufferings of IDPs.
“We will continue to work and ensure that the IDPs are finally resettled back to their communities with dignity,” he said.
Dangote commended Governor Kashim Shettima for his giant developmental strides in Borno, despite the Boko Haram crisis, saying the governor has achieved a feat that governors from oil producing states could not achieve.
He called on philanthropists and other corporate organizations to assist the state government resettle and empower the IDPs who have since returned to their liberated communities.
In his address, Governor Shettima described Dangote as symbol of Borno and a highest gift to Africa for always identifying with challenges posed by insurgency.
“I am so glad that with this support and construction of this village to our IDPs, Dangote will now serve as permanent symbol in the state.” Shettima said.
He said the estate provided by the Dangote Foundation, though very massive, is a ‘tip of the iceberg’ compared to what the foundation has done to support humanitarian relief in the troubled region.