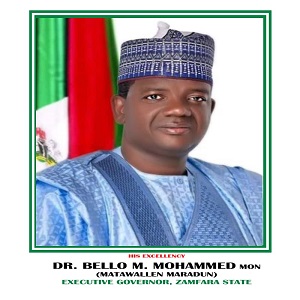 Bello Muhammad Matawalle is the current Governor of Zamfara State, Nigeria. He contested under the platform of the Peoples Democratic Party (PDP).

Matawalle’s first shot in politics was in 1998 when he ran for a house of assembly seat and won after he left the Federal Ministry of Water Resources, Abuja, joining the defunct United Nigeria Congress Party (UNCP).

Matawalle contested under the platform of United Nigeria Congress Party (UNCP). But after the death of Sani Abacha, military dictator, Abdulsalami Abubakar, his successor, dissolved the political parties and announced that elections would hold in 1999.

Matawalle was elected into the House of Representatives by his constituents Bakura/Maradun in May 2003 on the platform of the defunct All Nigeria Peoples Party (ANPP).

Muktar Idris was at first, issued the certificate of return, however, the court of appeal in Sokoto ordered that the INEC should withdraw the certificate.[4]

The Supreme Court later pronounced that the votes cast for the APC in the election as wasted and ordered that the candidate with the second highest votes be sworn in on Wednesday. This is because the APC failed to conduct primary election for all the candidates in Zamfara State.

Dr. Matawalle is married to four wives and blessed with children.