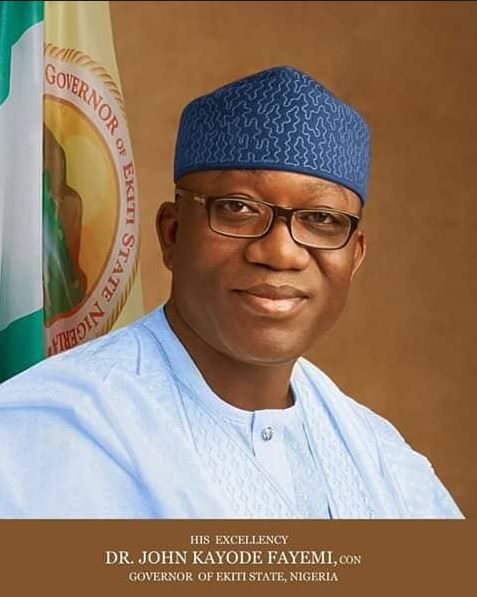 Dr. Kayode Fayemi was former Minister of Mines and Steel Development (2015 – 2018) under the Buhari APC-administration. He had the mandate of Nigeria’s President Muhammadu Buhari to reposition the Nigerian Mining sector to contribute optimally to the administration’s priority agendas of diversifying the country’s revenue base and creating jobs and economic opportunities for Nigerians. He was also the Chairman of the Governing board of the Nigeria Extractive Industries Transparency Initiative (NEITI). He was formerly the Governor of Ekiti State in Southwest Nigeria (2010 – 2014).

He holds degrees in History and International Relations from the University of Lagos and Obafemi Awolowo University respectively; a Doctorate in War Studies from King’s College, University of London and is a Fellow of the Centre for Peace and Conflict Studies, University of Ibadan. His research and policy development interests include: Natural Resource Governance, Democratisation, Constitutionalism, Security Sector Governance, Civil-Military Relations and Regionalism in the Global Context. Amongst other academic and public policy engagements at home and abroad.

Dr. Fayemi was the founding director of the Centre for Democracy & Development (CDD), a research and training institute dedicated to the study and promotion of democratic development, peace-building and human security in Africa. As a central figure in the coalition of civil society actors that resisted oppressive military rule in Nigeria, he was instrumental to the founding and running of opposition radio stations while in exile. His role in the struggle to restore democratic governance in Nigeria is documented in his book Out of the Shadows: Exile and the Struggle for Freedom and Democracy in Nigeria (CDD, 2005). His other publications include: Mercenaries: The African Security Dilemma, co-edited with Abdel-Fatau Musah (Pluto Press, 2000); Deepening the Culture of Constitutionalism: The Role of Regional Institutions in Constitutional Development in Africa (CDD, 2003); and Security Sector Governance in Africa: A Handbook (co-edited with Nicole Ball, CDD, 2004); Reclaiming the Trust (Amandla, 2012); Regaining the Legacy (Amandla, 2013); and Legacy of Honour and Service (Amandla, 2014).

Dr. Fayemi is a prominent member of the governing All Progressives Congress (APC) in Nigeria. In December 2014, he chaired the political party’s National Convention Planning Committee that conducted the unprecedented transparent and credible Presidential Primary election that produced the party’s Presidential Candidate for the 2015 general election and eventual winner, President Muhammadu Buhari. He also served as the Director, Policy Research and Strategy of the APC Presidential Campaign Council. In 2016,he led the party to victory as the Chairman of the election Management Sub-Committee of the Ondo State Governorship election.

He has received several awards and recognitions at home and abroad, and holds the national honour of Commander of the Order of the Niger (CON). Dr. Fayemi was born in Ibadan on 9th February, 1965. He is married to Erelu Bisi Fayemi, the renowned women’s and children’s rights advocate, international development specialist, writer and social entrepreneur.