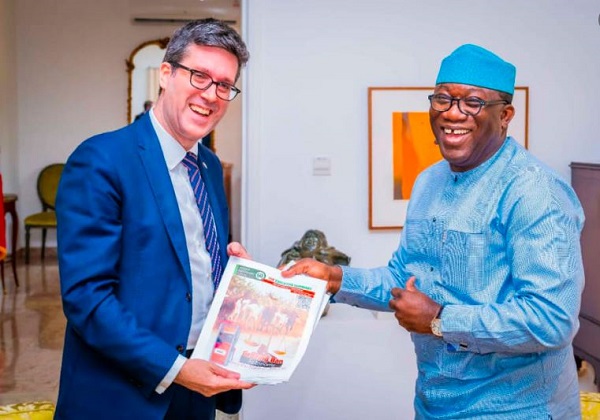 The Chairman of the Nigeria Governors’ Forum (NGF), Governor Kayode Fayemi of Ekiti State, has called on Nigerians to rise to the defence of democracy in Nigeria with a view to advancing the development of the country.

Governor Fayemi gave the charge in Abuja when he paid a courtesy call on the Canadian Ambassador to Nigeria, Mr Nicolas Simard, at his residence, as part of the 3-day official tour to the Diplomatic Community in Nigeria.

The visit by the NGF Chairman was part of the Chairman’s shuttle diplomacy to representatives of the Diplomatic Corps in Nigeria, which is one of the initiatives of the Nigeria Governors’ Forum secretariat, towards engendering inter-governmental synergy between global governments at the subnational level.

According to the statement issued by the NGF’s Media office, Governor Fayemi during the high-powered meetings discussed issues of bilateral importance between the countries and their governments at the subnational level, including citizens’ engagements, the economic progress of the federating states, youth mobilisation and organisation, and women’s empowerment; revenue generation, the economy, education, infrastructure development, among others.

Both the NGF Chairman and the Canadian Ambassador unanimously agreed that organisations like the NGF are the best platforms for healthy debates with the central governments on issues like restructuring, citizens engagement and internal and external security.

“Dr Fayemi rationalised that to advance development, it is always in order, to engage countries of interest and their diplomatic representatives to share their understanding of events in their host countries and learn from the experiences of their past.

“Specifically, the NGF Chairman told the Canadian ambassador that Nigeria has made ‘remarkable strides in gender equality with the Nigeria Governors’ Wives in the forefront and their husbands, the Governors, as cheer-leaders.’

“As it is, Dr Fayemi buttressed, 27 states including those that were hitherto considered conservative, have signed the VAP Act, as evidence of their commitment to mitigating violence against women in our societies,” the statement read.

In his remarks, Mr Simard who resumed office early in the year disclosed that there are 12,000 Nigerians in Canada, 5,000 0f which are students.

Mr Simard disclosed that there are remarkable similarities between Canada and Nigeria and that Canada had also experienced calls by secessionists which Nigeria is currently experiencing, and expressed willingness to help Nigeria in understanding how to find solutions to them.

At the Embassy of the People’s Republic of China, where he spoke with the ambassador, Mr Cui Jian Chun, the NGF chairman negated the death-trap diplomacy that has been wrapped around the conversation in most African countries, when it comes to their relationship with China, assuring the Ambassador of the full cooperation of Nigerian governments at the subnational level.

Dr John Kayode Fayemi also praised the vaccine diplomacy of the Chinese while welcoming any support that will help Nigeria to develop its own vaccines to help raise the ratio of vaccinated people in the population for Nigeria to achieve herd immunity.

When he visited the South African embassy this morning, the conversation revolved heavily around the ENDSARS movement and the help that the South African people can render Nigerian youths to be able to articulate their grievances in a non-violent manner towards achieving results.

Also during the meeting with the ambassador of the Republic of South Africa to Nigeria, Thamsanqa Dennis Mseleku, the NGF Chairman discussed three key issues including xenophobia, trade and youth dialogue.

Ambassador Dennis Mseleku acknowledged that the NGF is strategic to such a conversation.