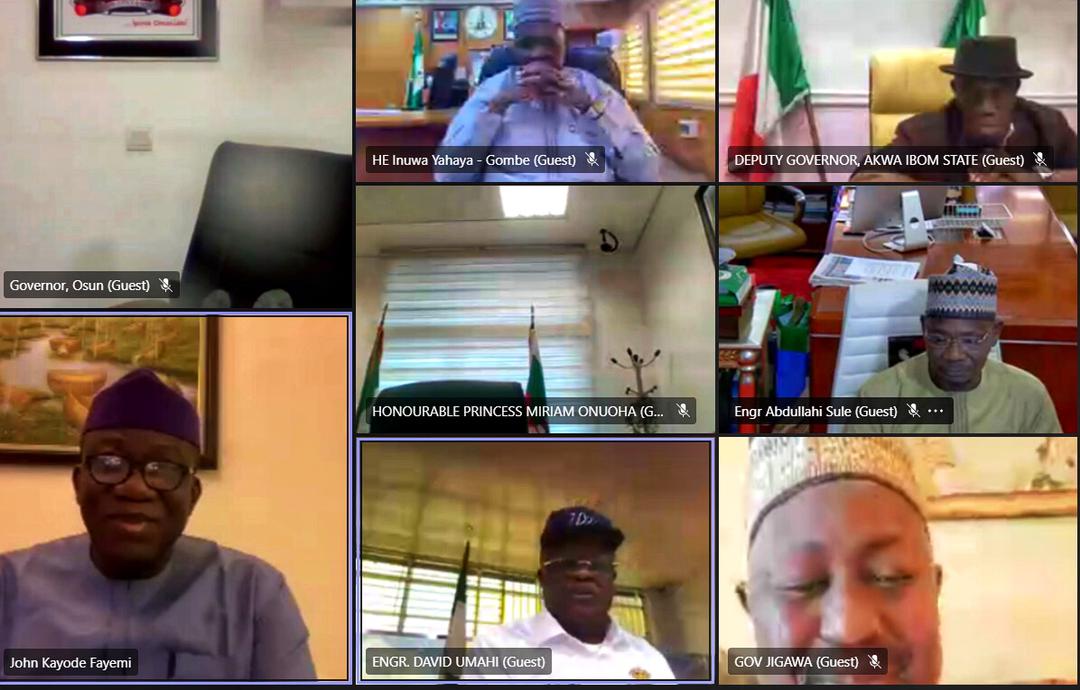 The resolution was passed during the NGF’s 32nd teleconference meeting chaired by its chairman, Governor Kayode Fayemi of Ekiti State.

According to the communique issued at the end of the meeting, the template was developed following a meeting of the State Attorneys General and Commissioners of Finance which held on June 25, 2021 at the directive of the Forum.

On the issue of Nigerian Postal Service Bill, 2021 & Stamp Duties Collection, the Forum however expressed concern with certain proposed amendments to the Principal Stamp Duties Act by the Senate which seeks to remove the powers to administer and collect stamp duties from the relevant tax authorities (Federal Inland Revenue Service or State Internal Revenue Service, depending on the nature of the transaction) to the Nigeria Postal Service.

“The provisions of Section 163 of the 1999 Constitution requires that Stamp Duties on transactions between a company and an individual should be paid to the FIRS and returned to the State of derivation. The Forum resolved to engage with the National Assembly on the matter.

On the Petroleum Industry Bill (PIB), 2021 passed by the National Assembly, the Governors unanimously expressed “full support of the unbundling and commercialization of the Nigeria National Petroleum Corporation (NNPC) but concerned with the proposed ownership structure of the NNPC which places ownership on the Federal Government.”

According to the Governors, the amendment as well as the proposed 3% share of oil revenue to host communities and 30% share of profit for the exploration of oil and gas in the basins will be responded to at relevant channels including the National Assembly and the National Economic Council (NEC).

On the proposed sale of Niger Delta Power Holding Company (NDPHC) Assets, the Forum resolved to take a position on the planned privatization of assets of the Niger Delta Power Holding Company (NDPHC) which were listed by the Bureau for Public Enterprise (BPE) without due consultation with State governments who are shareholders of the company. NDPHC is incorporated under the Companies and Allied Matters Act as a private limited liability company with shareholding fully subscribed to by the Federal, State and Local Governments with a mandate to manage National Integrated Power Projects (NIPP) in the country.

On insecurity challenges ravaging the country, the Forum put its weight behind the launch of its Peace and Inclusive Security Initiative (PISI) set up to tackle insecurity, conflicts and violence in the country. The launch of PISI which took place on 8th July 2021 heralded an important milestone for NGF as it seeks to build a more inclusive and collaborative platform to drive an urgent country-wide response to security challenges in the country.

The NGF Chairman also informed members of the inauguration of the  National Steering Committee (NSC) of the National Poverty Reduction and Growth Strategy (NPRGS) chaired by Vice President Yemi Osinbajo with a mandate to lift 100 million Nigerians out of poverty in ten years. State Governors have been enjoined to nominate focal persons who will consolidate policy strategies put in place by State governments to end poverty in the country. The focal persons will be inducted into a technical working group chaired by the Governor of Nasarawa State, Abdullahi Sule and co-chaired by the Minister of State for Finance, Budget and National Planning, Prince Clem Agba.

The Forum received an update from the Governor of Lagos State, Babajide Sanwo-Olu on the recent rise in confirmed COVID-19 cases and call for consensual action to prevent a third wave in the country.

“Following the update, the Forum called on all State Governors to revive their COVID protocols and collaborate with the Nigeria Centre for Disease Control (NCDC) to take appropriate and immediate actions to flatten the transmission curve. The Forum will interface with the Presidential Steering Committee on COVID-19 to accelerate processes required to fast track the delivery of additional vaccines for the country.

“An update on the States Fiscal Transparency, Accountability, and Sustainability – Program-for-Results (PforR) was made by Mr. Olanrewaju Ajogbasile, the NGF SFTAS Programme Manager, who informed State Governors of the ongoing verification exercise for the SFTAS disbursement linked indicators and debt reconciliation exercise carried out with the Federal Ministry of Finance, Budget and National Planning (FMBNP), the Central Bank of Nigeria (CBN) and the Debt Management Office (DMO). The Forum commended the SFTAS programme office and welcomed the reconciliation exercise which will be seen through by the State Commissioners of Finance.

“Following an update on the Nigeria COVID-19 Action Recovery and Economic Stimulus – Programme for Results (Nigeria CARES), from Mrs. Firo Elhassan, NGF Programme Manager, the Forum resolved to interface with the Federal Ministry of Finance, Budget and National Planning (FMBNP) and the Federal Ministry of Justice (MoJ) to ensure speedy approval and commencement of the programme in line with the 2021 budgets of states.

“Sequel to a presentation by Rt. Hon. Princess Miriam Onuoha, Chairman, House of Representatives, Committee on Disabilities on the adoption of the Discrimination against Person with Disabilities (Prohibition) Act (2018), the Forum committed to actively support, through the NGF Secretariat, the domestication of the disability law in States where it has not already been passed. Since 2018, at least 12 States have passed disability laws, including Ekiti, Lagos, Kwara, Kogi, Plateau, Jigawa, Ondo, Bauchi, Anambra, Niger and River State.

“The Forum received a presentation on the Roadmap for Successful Digital Transformation Execution in States from the Chief Executive Officer of Suburban Fiber Company, Mr Bruce Ayonote. The proposal which sought to build both hard and soft digital infrastructure for State governments was welcomed by State Governors. The Forum mandated its Secretariat to facilitate the planning and partnership process with interested State governments.

“Lastly, the Forum received a report on the Diversification and Non-oil Export Opportunities for States Post-COVID-19 from the Policy Development Facility (PDF) Bridge Programme.

“The Forum welcomed the study and noted that findings of the report will help strengthen the diversification agenda of States.