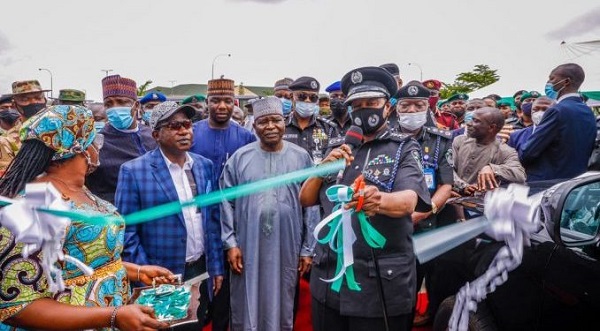 The Inspector General of Police (IGP), Ibrahim Alkali Baba, and the Governor of Plateau State, Simon Lalong, yesterday, commissioned 50 new patrol vehicles and 200 security motorcycles purchased by the State government, to tackle issues of kidnapping, banditry and criminalities in the state.

The IGP, who was at the new Government House Rayfield, Jos, for the commissioning of the vehicles and motorcycles, applauded the effort of Plateau state governor towards addressing security challenges in the state.

He said Lalong’s efforts at restoring peace and security in Plateau state, and consolidating it with the acquisition of vehicles and providing other logistics requirements for the police and other security agencies, were commendable.

He assured that more police personnel will soon be recruited to boost the manpower of the force, while the training of the personnel was also being accorded serious attention.

Governor Lalong described the event as a momentous occasion that was aimed at boosting the capacity of security agencies in the State, towards tackling criminal activities and ressurging attacks on innocent citizens.

He said: “To a very large extent and without sounding immodest, we have made giant strides in restoring peace in Plateau by bringing down the level of insecurity and restoring confidence of the citizens, as well as attracting investors, visitors and tourists who continue to troop into the state in large numbers.

“We have also realised that while we consolidate on the peace, the crisis merchants are not sleeping as their source of business has been obstructed, due to the actions we have put in place to restore stability. Therefore, they are restless and trying various methods to breach the peace.”

Lalong said the criminals have, in recent times, resorted to isolated attacks in various communities which are carried out in a hit-and-run fashion.

While commending the security agencies for doing their best to tackle such attacks and other criminal activities, he expressed deep concern over the inability to prevent isolated killings or arrest the perpetrators in some cases.

He told the police and other security agencies that he did not want to hear about unknown gunmen again in Plateau State.

By Gyang Bere,
The Punch